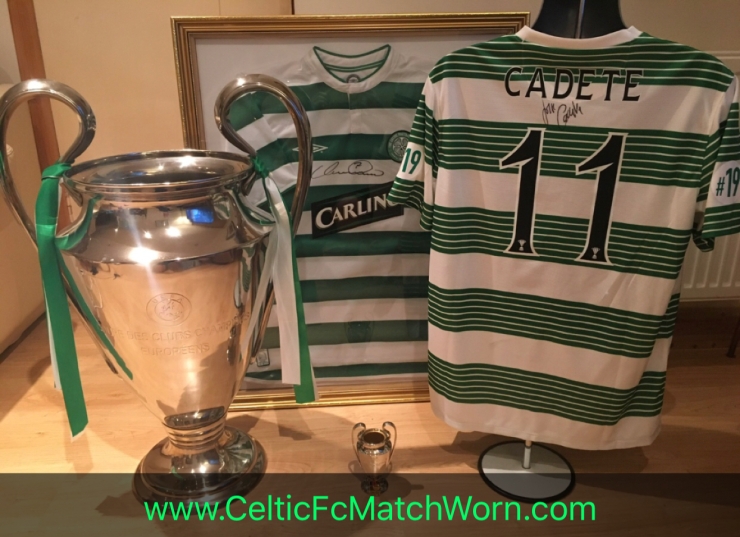 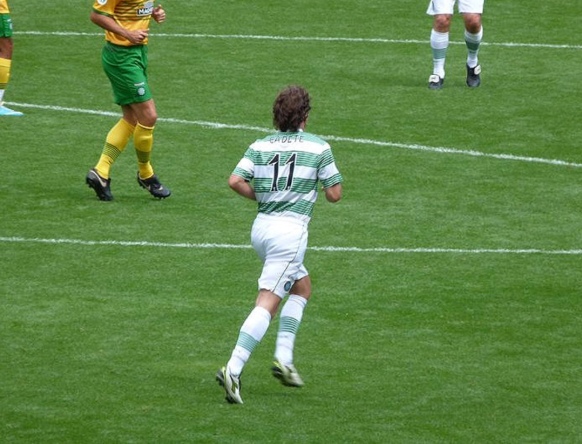 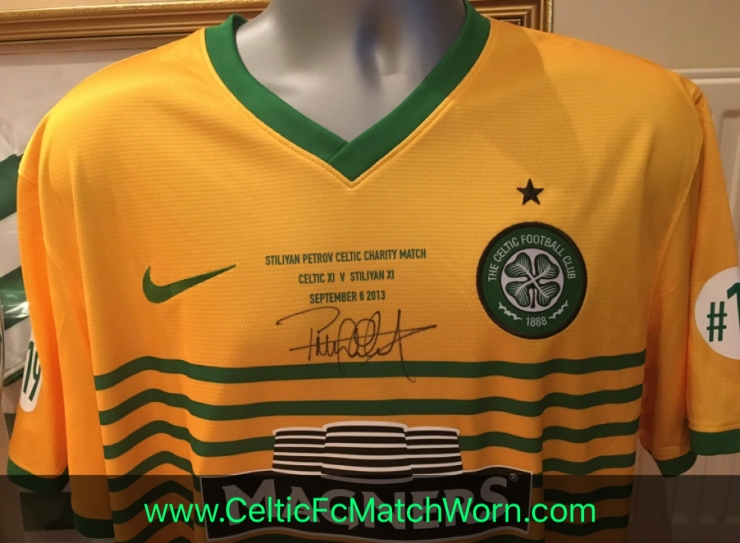 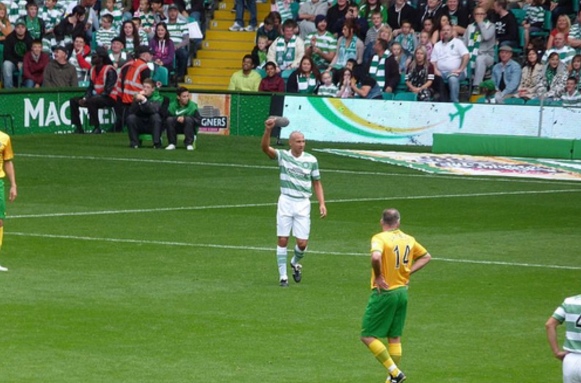 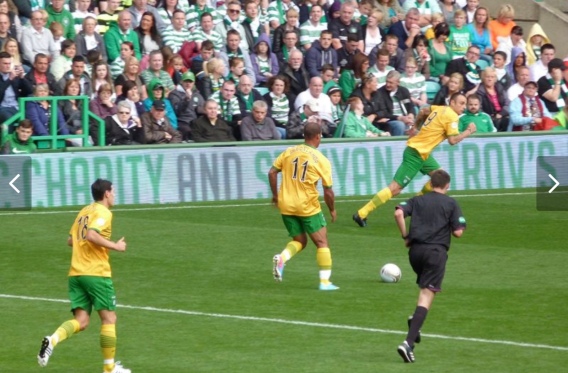 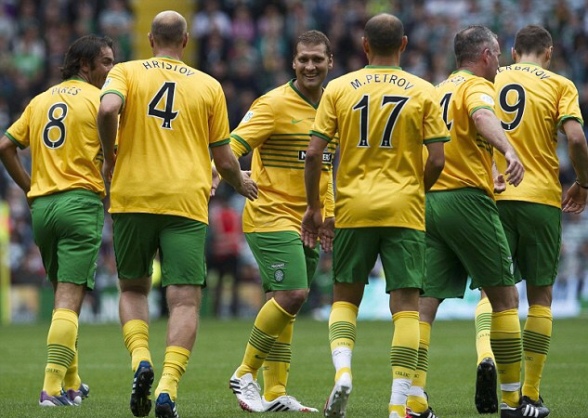 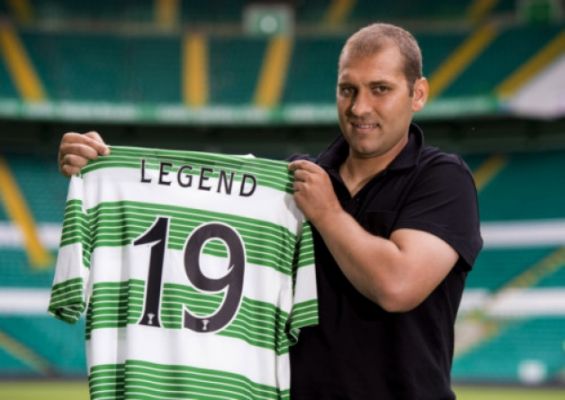 Former Celtic player overcome by support as 60,000 pack into Celtic Park to pay tribute and raise funds for charities.

There were tears and cheers as football came together to tell Celtic and Aston Villa legend Stiliyan Petrov ‘‘You’ll Never Walk Alone’’ at an emotional charity match.

Current and former footballers, pop stars and celebrities laced their boots for the poignant game at Celtic Park in honour of the dad-of-two, who retired after a year-long battle with leukaemia.

And there was not a dry eye in the house when the stadium erupted into a powerful rendition of the Celtic and Liverpool favourite, You’ll Never Walk Alone.

Overcome Stan, 34, shed plenty of tears throughout the day, including when one of his sons ran to him on the field at the final whistle.

There was the Villa tradition of a 60-second round of applause in the 19th minute of the match – only this time the game stopped and all the players joined in as supporters rose to their feet.

Petrov couldn’t stop the tears at that point.

The former Bulgaria international, now in remission from cancer, has established a foundation to support people going through the same experience he bravely faced.

A crowd of more than 60,000 saw a Celtic XI against a Stiliyan Petrov XI, with Stan’s team coming out 5-3 winners.

Yet no-one cared about the result as the game raised funds for the Stiliyan Petrov cancer charity foundation and the Trussell Trust, who run foodbanks across the UK.

Stan addressed the crowd after the game and came close to breaking down again. He said: ‘‘You’ve made today special for me, my family and for all these players. Thank you very much.’

‘‘I said I wouldn’t cry but I couldn’t hold it. It was an absolute privilege,’’ Stan said later. ‘‘I’m just happy to see my family every day.

‘‘Today I’m here with all these friends and the Celtic family. It’s incredible.’’

“Thank you for standing by me when I had the hardest time in my life.”

Former England captain and Chelsea star John Terry also showed his caring side by taking to the field – yet was still jeered by fans.

The incident later sparked a Twitter tirade from some upset 1D fans, including reported threats being made to the Birmingham-born player.

But the row did not overshadow what was an emotional occasion for Stan, proud dad of Stiliyan jnr and Kristiyan.

Before the game, he had revealed how wife Paulina talked him out of trying to make a comeback when his leukaemia treatment ends in two years.

He said: ‘‘I was thinking about it but my wife said: ‘You were getting a bit slow in the last few years so imagine how slow you would be if you came back!’

“She had a point and I can say I had a very good career and should leave it that way.

“Paulina has been great and has always been there for me. I listen to her sound advice. I’ve been very fortunate to have her.’’

Dalglish said: “The support he has had, first and foremost from his family, but also from the footballing family, at Celtic and Aston Villa, has been unbelievable.

“The reception they gave him was a fitting tribute to a very strong man who is an example to everyone else who gets a bit of bad news.

“The turn out was fantastic and a fitting tribute to a really brave man.

“The harder you stand up for yourself and the stronger you are in the fight against it, the better chance you have of succeeding.

“He is an inspiration for what he has gone through. He never moaned or complained, he tried his best to get through it.

“He is a man of tremendous courage and determination and I just hope that it pays off.”

O’Neill added his own praise of Petrov, who he took to Villa Park in 2006.

“I am just astonished at the reception he got.” said O’Neill. “I really shouldn’t be but it was absolutely fantastic and he deserves it.

“I have enormous respect for him and his generosity in every aspect of life is phenomenal.”

When O’Neill was asked about the condition of One Direction star Tomlinson, who looked in distress as he was substituted after being tackled by Aston Villa’s Gabriel Agbonlahor, he said: “Agbonlahor smashed into him and he picked himself up and he was ill at the dressing room area.

Agbonlahor said he would apologise to Tomlinson.

“It was one of those things,” he said. “I’ll apologise to Louis when we meet up with everybody after the game.

“I know he enjoyed playing in the game and it’s fantastic that he took time out to be here, and the same with everyone else who played.

“It was a fabulous day for Stiliyan Petrov and for Celtic and their respective charities.”

Martin O’Neill and Kenny Dalglish will take charge of the teams at the #19 a charity legends’ match to celebrate the career of Stiliyan Petrov.